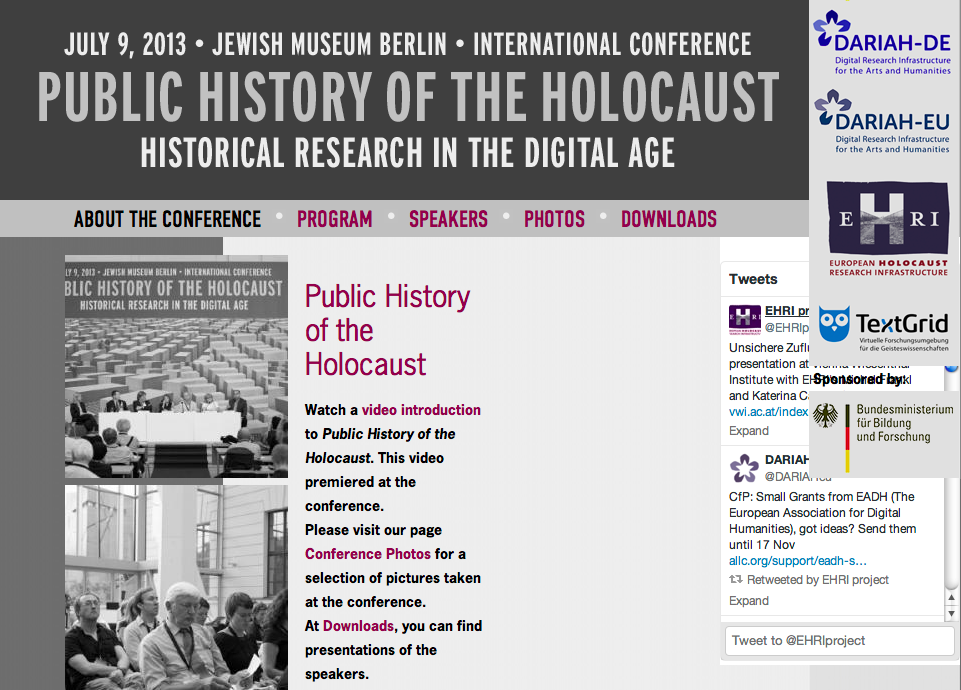 Internet can take Holocaust education to the next level

Berlin, July 9, 2013 Holocaust denial takes on a life of its own on the Internet. And the realities of the world wide web are such that effectively policing online Holocaust denial is unachievable. “So instead of the law as a first resort, we need greater focus on education and counter-speech, and greater involvement of Internet intermediaries. These tools have greater potential to combat online Holocaust denial”, says Christopher Wolf, a renowned internet-lawyer and Holocaust denial fighter from Washington DC at a conference on Public History of the Holocaust in Berlin.

Georgi Verbeeck, Professor of German History at the University of Leuven, argued that existing educational campaigns on the Holocaust will only provide the general public with a greater knowledge of the Holocaust. “But the idea that such information can make us better people is highly questionable. The belief that it could actually prevent atrocities in the future rests upon wishful thinking”. One should look for different ways to engage the public with the Holocaust in order to help achieving these goals, according to Verbeeck.

German Federal Minister of Education and Research Johanna Wanka, present at this conference organised by European historians, archivists and digital humanity scholars,  promises to support further development of such tools: “Digital research infrastructures may help Holocaust research to assemble the resources stored in public and private archives like the pieces of a jigsaw puzzle. They can bring history and personal lives together and help us remember the past”, says Wanka.

She was echoed by Robert-Jan Smits, Director-General of DG Research and Innovation of the European Commission, which has funded the development of digital research methods for the humanities. “It is essential that this morbid period in Europe’s history is never forgotten. Therefore, archives of the Holocaust need to be preserved, museums supported, education projects encouraged and research activities fostered.”

Conference co-organiser Conny Kristel pointed out that we have to reconsider the public dimension of Holocaust research. “History thrives through the Internet but is also shaken by it. As technology improves, more and more people can easily handle and present facts, data and interpretations. Unfortunately this also goes for those who deny that the Holocaust even took place.” This calls for new ways of cooperation between scholars and the general public using the Internet, according to Dr. Kristel. Fortunately Holocaust studies has never been an exclusively academic undertaking. The history of the Holocaust, has always been a field in which professional researchers work side by side with ‘amateurs’ and dedicated volunteers.

Research Infrastructures for the Humanities

The conference in Berlin presented initiatives by several European and German funded research infrastructures for the humanities to publish and integrate historical information about the Holocaust and historical-critical methodologies to digitally analyse these documents. DARIAH is a pan-European digital research infrastructure to support integrating and preserving research data and digital research practices in the arts and humanities. The TextGridproject provides researchers with services and tools for analysing text data in distributed digital archives. EHRI supports pan-European Holocaust research in identifying and publishing Holocaust material. It works together with DARIAH to provide access to critical and scholarly resources on the Holocaust and to ensure the long-term availability of these materials.