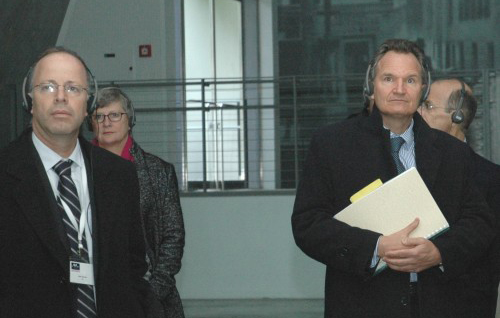 International experts gather in Jerusalem to discuss EHRI progress over 2011

Jerusalem, 19 January 2012 Scientific research of the Holocaust will remain a moral responsibility of the international community, historians and archivists concluded during the annaual meeting of EHRI, the European Holocaust Research Infrastructure, at Yad Vashem in Jerusalem. While it will take time to bring together and categorize all dispersed sources and archives, the first steps to come to one worldwide research infrastructure are bearing fruit.

The EHRI-project – financed by the European Union and coordinated by the Dutch NIOD – will connect all Holocaust-related collections and archives . More than twenty organizations in 13 countries have worked together already for more than a year to execute this programme. In 2011 the rough structure of the EHRI- thesaurus was developed. This thesaurus will contain keywords like “ghetto” and “razzia” that will be the basis for EHRI’s search engine. In addition, over the past year, expert workshops on photography and propaganda were held and research fellowships were offered to scientists researching specific collections. This week the first results of EHRI are being discussed in a meeting in the world famous Holocaust research centre Yad Vashem in Israel.

According to EHRI project director Dr. Conny Kristel the interest in the project is immense. “Apart from the participants that we started off with, many new organizations have offered their contribution in bringing together the world wide dispersed Holocaust archives. What has become clear to all people involved is that EHRI will not be another institution but a movement towards integration.”

European added value
Present in Jerusalem, Director-General for Research and Innovation of the European Commission, Robert-Jan Smits, underlines the added value of the EHRI project: “The European Commission is impressed by the progress that the EHRI project, financed under the EU 7th Framework Programme and coordinated by NIOD, has made. EHRI is a project of great scientific importance since it brings together in a pan-European network, the national Holocaust archives, with the aim to stimulate research, facilitate access and preserve unique material on the Holocaust. The active participation of Yad Vashem in EHRI is key to its success,” says Smits.

Photo: Excursion in Yad Vashem with Haim Gertner, director of the insitute’s archives,  Conny Kristel, director of EHRI and  Robert-Jan Smits, Director-General for Research and Innovation of the European Commission